In this post, we will look at how the five S.O.L.I.D principles of object-oriented design are applied to the architecture to modularise, isolate and control the flow of general components. The components we will discuss are highlighted in white (see the high-level sequence diagram below). These components are the abstraction that drives the framework, enabling the developer to build the concrete components. 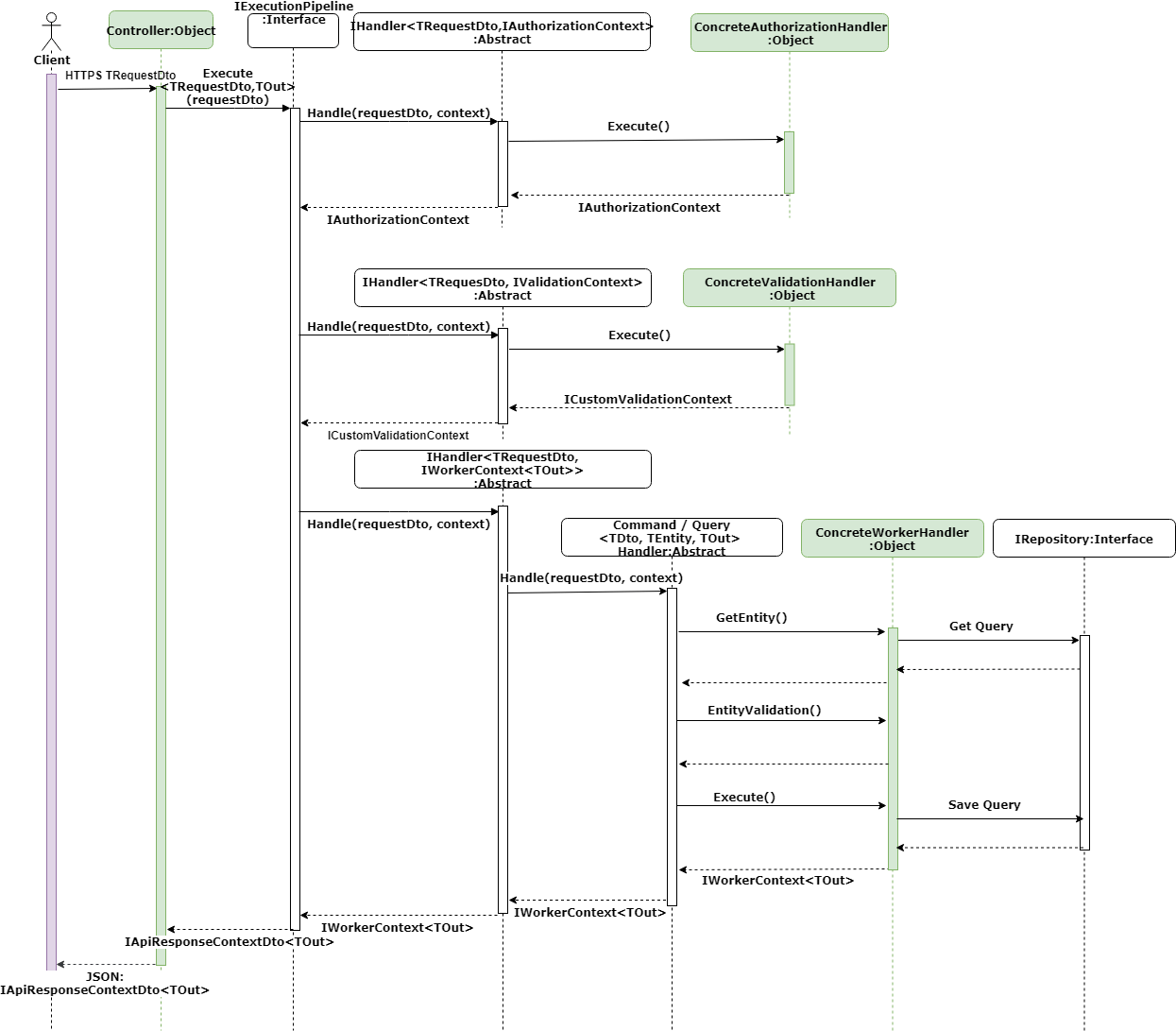 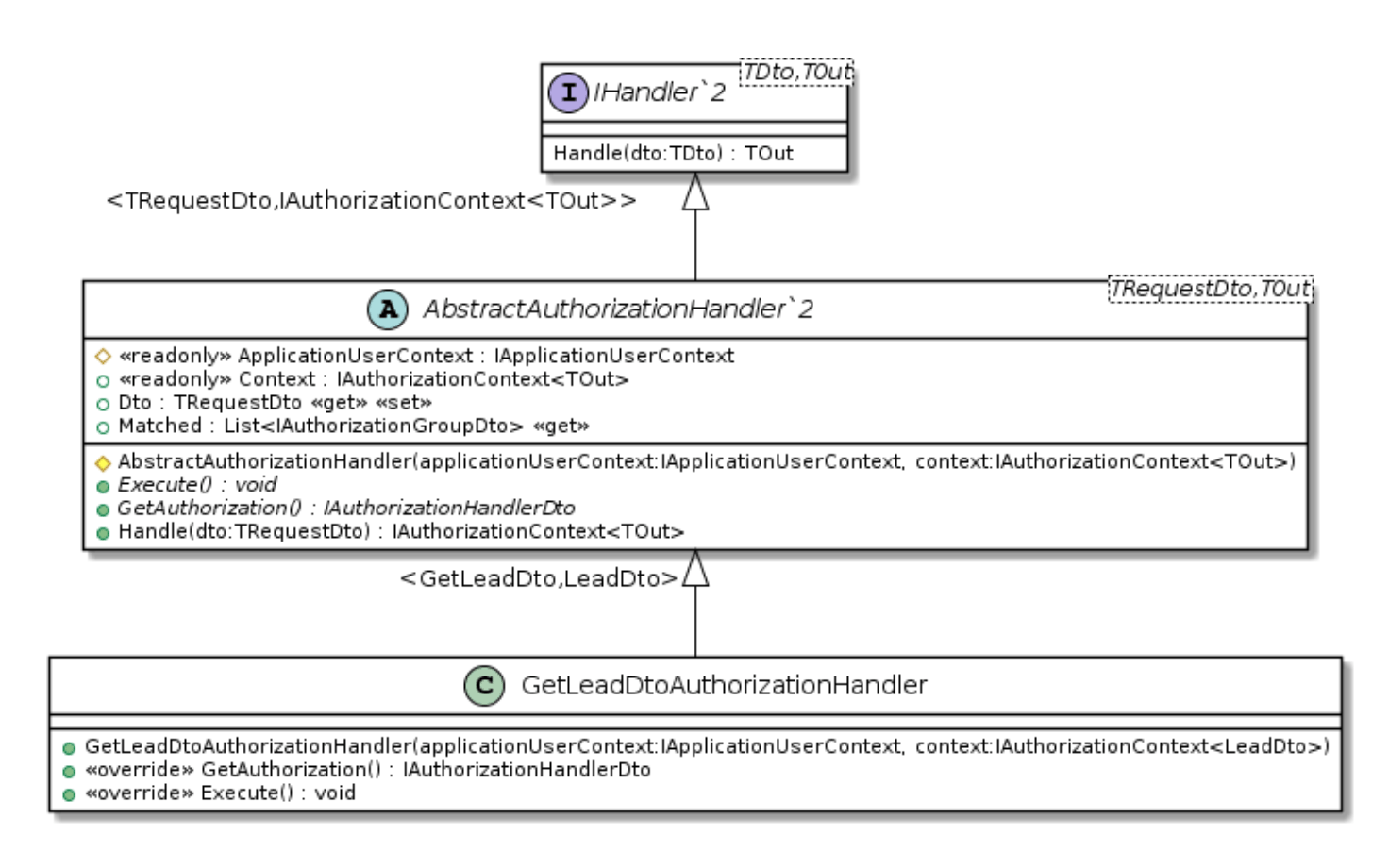 Every module or class should have responsibility for a single part of the functionality provided by the software, and that responsibility should be entirely encapsulated by the class.[1]

This principle is visible almost everywhere in the framework as well as the concrete implementations. In the framework, the Execution Pipeline is responsible for executing all the handlers on our behalf and gives us a single point for error handling and logging. The abstract handlers are responsible for what their names suggest. The three types of handlers; Authorization, Validation and Worker handlers each have a single responsibility to handle access rights, validation for incoming Dto’s and maintain the business logic respectively. The abstraction forces the developer to conform to the responsibility of each class and reduces the risk of mixing responsibility. For example, business logic cannot be maintained in the Authorization or Validation handlers. The abstraction also gives us the ability to test these implementations in isolation for their specific single responsibility.

Software entities (classes, modules, functions, etc.) should be open for extension but closed for modification.[2]

The benefits of this principle are best achieved using abstraction rather than inheritance. Inheritance introduces tight coupling and forces the subclasses to depend on its superclass implemented detail. By using abstraction we introduce a high degree of loose coupling. The abstraction in the framework is closed for modification and we can provide new implementations to extend functionality. The implementations of the three types of concrete handlers are independent of each other and don’t need to share any code, no references or dependencies on each other or any other handlers. The high degree of abstraction gives the ability to substitute implementations.

In short, this means that objects of a superclass are replaceable with objects of its subclasses without breaking any code. An object of a subclass will behave exactly like an object of its superclass.

Clients should not be forced to depend upon interfaces that they do not use.[1]

We see this principle applied to the context passed between handlers as well as on the database Entities.

The IExecutionPipelineContext is resolved from the IOC container in the Execution Pipeline and inherits the other three context interfaces. The context is passed to each handler as the execution continues. Each handler accepts the appropriate interface listed above.

The Interface segregation principle allows us to only expose properties of the IExecutionPipelineContext, the specific handler needs while maintaining the same instance of the context through the Execution Pipeline life cycle, meaning the validation handler will only have access to the properties on the IValidationContext interface. We do not want to expose properties to handlers which are not going to use them.

Similar to the Single Responsibility Principle the goal is to reduce frequent changes by splitting code into multiple independent parts and reducing the responsibility to one single place.

This principle is a specific form of decoupling software modules. When following this principle, the conventional dependency relationships established from high-level, policy-setting modules to low-level, dependency modules are reversed, thus rendering high-level modules independent of the low-level module implementation details.[1]

According to Wikipedia: In software engineering, inversion of control (IoC) is a programming principle. IoC inverts the flow control as compared to traditional control flow. In traditional programming, the custom code that expresses the purpose of the program calls into reusable libraries to take care of generic tasks, but with inversion of control, it is the framework that calls into the custom, or task-specific, code.[5]

Dependency injection is a programming technique that makes a class independent of its dependencies. It achieves that by decoupling the usage of an object from its creation. This helps you to follow SOLID’s dependency inversion, single responsibility principles, and the open-closed principle.

The Execution Pipeline uses an IoC container with a Service Locator to initialize and resolve handlers. By utilizing the IoC container we can use Dependency Injection to inject initialized services into a handler’s constructor using interfaces. The DI along with an interface decouples the handlers from services making handlers independent from a service’s implementation detail. Examples of these services are the IReadOnlyRepository, IRepository, IMapper, IApplicationUserContext, and the Context Interfaces.